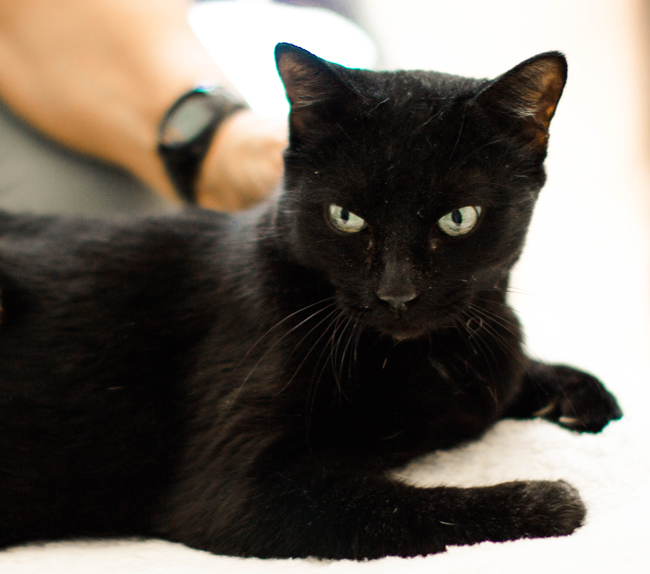 Pearl’s “event” took place April 6, 2018 at “The Care Clinic” in Orange where she was euthanized with the caregiver Lee in attendance. Immediately following Pearl was driven to “Only Cremations for Pets”, Newport Beach, where a “grieving room” was waiting for Lee and her final moments shared with Pearl. Lee will receive her ashes in a pretty box with her Pearl’s name engraved next week.

We are thankful that our rescue kitty Pearl came back to Community Animal Network to be cared for in her final days and loved by her foster parent, Lee Turner.

Lucy aka Pearl’s Story: A tiny microchip led her back to Community Animal Network after being impounded at the Orange County Animal Care Center in June of 2017.

Lucy was her given rescue name in 2008 when adopted as a kitten by a Huntington Beach Family for their daughter. The person that found the cat Lucy and called animal control lived on the same street as the owner, but, we doubt that she knew the cat belonged to a neighbor.

Community Animal Network called the owners and was told that Pearl went missing in March of 2017 and was presumed killed by coyotes and that they adopted another cat and did not want Pearl back.

After many months of being with Community Animal Network Pearl suddenly became unable to stand, or walk to the litterbox. It was initially believed that when foraging to survive that cat Pearl ingested a rat, mouse, or bird infected with the parasite toxoplasmosis that caused symptoms of neurological issues and lead to the diagnosis.

Pearl’s first attempt of recovery from toxoplasmosis was a long term antibiotic treatment with the antibiotic clindamycin which proved to be unsuccessful.

Information about Toxoplasmosis and the use of antibiotics.

Because Pearl’s blood titer level for exposure to toxoplasmosis was low and it had been a long time since her rescue back, Dr. Elaine Wexler-Mitchell had concern that Pearl’s original diagnosis by one of her associates was incorrect and therefore diagnosed a tumor on her spine that mimicked the neuroglial signs of toxoplasmosis.

Community Animal Network posted on March 5th that we were scheduling Pearl’s euthanasia and that the foster parent needs to feel it’s the right time to schedule the “event”.

Those eyes will no longer be looking back and with hope always in our minds, it takes time for the rescue caregiver to prepare mentally for the last days. Today, Lee says good-bye to the rescue cat she came to love.